Radiohead’s “Creep” is one of those songs that I have been listening off and on for many years now. It never bores me. This is classic rock songwriting as it should be done. I recorded an ‘acoustic’ version today at my Home Studio, using my Samick electro-acoustic guitar, my Washburn and added some additional guitarwork using my Gretsch Electromatic. Vocal mic: AKG C900, a gift from a friend in the United States and I really like this mic a lot!

Mind you: after recording the initial guitar parts and vocal I re-recorded the vocal track because that would allow me to edit the vocal without effecting the guitar sound since the acoustic guitar was, of course, causing bleed in the vocal track and your really don’t want that to happen!

Anyone who knows the original will notice I left out the bridge. Impossible for me to sing!

Bob Dylan has been an inspiration to me and many, many, other musicians for decades. His music has been sung and recorded by thousands of singers and bands and inspired many people to start a career in music and write songs. So far he’s also the only artist who ever won a nobel prize!

For me, Dylan has been an inspiration ever since I picked up a copy of “Shot of Love” at a sale. I was only 13 years old and had read a review of this album in a Christian magazine. They were raving about it but, as I later found out, most fans didn’t like Dylan’s “gospel years” at all. This has changed btw. Even Rolling Stone Magazine is now raving about it, after he rereleased the music from this period including a lot of live recordings. Anyway – I bought the album and started digging back. I ended up buying almost all his albums, visiting his concerts (Groningen, Rotterdam) over the years that followed. And still do.

Dylan is a master of words. Many of his songs are pure poetry but also show the raw side of life. Hurricane, anyone? And also in this song. Lay Lady Lay. It sounds so lovely, but listen to the words! I always loved it. I also recorded it. It is with some restraint that I post it. This is, for now, as it is and it is a work in progress btw. Some changes in the drums need to be done (by another percussionist). But I’d like to post it now. Hope you like it!

Bob Marley is of course a well known reggea singer and songwriter. I like many of his songs a lot, especially ‘Redemption Song’. So, while testing some improvements on my studio (video) I was playing it and decided I wanted to record it for the ‘Acoustic’ series.

For this track I used the following:

I duplicated the guitar on two tracks to widen it more and put some reverb on the vocal. On the master bus I put a limiter. That’s all 🙂

In God’s Country from the album The Joshua Tree is one of the best U2 songs, from one of their best albums ever. Since I’ve been a staunch U2 fan, ever since I heard them on the radio when I was around 12 years old, I love to play their songs. I hardly ever record them. This is an exception on this ‘rule’. It’s a perfect song for an acoustic version.

Now many ‘singer songwriters’ whome record at home, record in one take. This is of course possible. The video suggests I did the same. And yes — I recorded vocals and guitar at the same time; the guitar trough a DI (Direct Input) and guitar and vocals on separate tracks. After that, I re-recorded the vocals on an additional track (as you can see in the video). The reason for this is simple: if you record vocals and guitars at the same time, the guitar sound will ‘bleed’ into the vocal track. It makes mixing it very difficult. So if you ever record acoustic guitar and vocals for a simple demo or album: make sure you can split them.

If you record an acoustic guitar that isn’t an electro-acoustic, don’t sing along! Your vocal will ‘bleed’ into the guitar track and if that happens, you can’t do overdubs on your vocal unless you re-record the guitar as well.

The audio might (ormight not) become available in the future, for now I’m only publishing the acoustic series on Youtube.

What better way to celebrate using a new studio than recording a classic, acoustic, folk song? The ZolderStudio (LoftStudio) has moved! So I did some test recordings and one of them is Dylan’s “Knocking on Heaven’s Door”. And I did not only record the song, I made a video of the recording session.

It’s just a simple “one-take recording” using my MXL770 for vocals, a t.Bone EM700 for the guitar and I’ve used the Behringer UMC404HD as an interface. The DAW I’ve used was Ardour (Linux).

MOVING TO A NEW STUDIO
I’ve also made a short video about the move to the new studio. A full studio tour will be made as soon as the studio is setup completely. I’m still waiting for acoustic foam, ordered a floor carpet and there are now new monitor speakers too. So subscribe to the channel to receive updates! 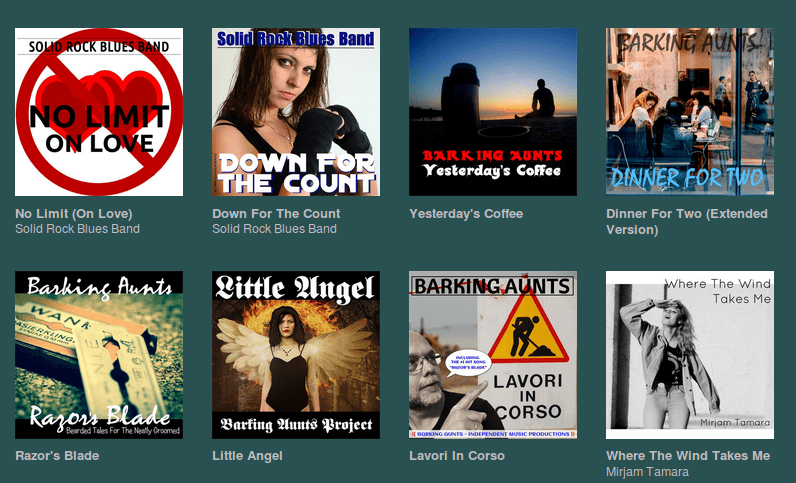 As of today, the full back catalog of the former “Barking Aunts Project” and the “Solid Rock Blues Band” are now available for FREE at the BandCamp website.

Except for our most recent Single, No Limit (On Love) all albums, EP’s and other materials are now available as a “whatever you can afford” FREE download.

The albums can be downloaded here: https://barkingaunts.bandcamp.com/

The only thing we ask in return is your email address, so we can send you updates about the projects and albums. Don’t want to receive email updates? Donate a small fee and we won’t bother you!

WHY DID WE DO THIS?!

You might wonder why we are now offering all music as free downloads. The reason for this is simple: over the years we’ve spend a lot of time and effort in recording music. Publishing it. On Spotify, for example, this resulted in well over 33,000 plays/streams. We got paid US$ 1.35 for those 33,000 streams. That’s what we consider a total and complete insult. So, since they’re giving it away – why don’t we? And get something in return: a way to get in touch with the people listening to our songs.

We will continue to make singles, albums and EP’s and make them available on commercial platforms (since they will put them on Spotify, iTunes and so on). But on our BandCamp page you can get them for free. Except for the most recent publication. So, the back catalog, as of now, will be free. Forever. As soon as we publish something new, it will be for sale and the previous single, album or EP will be set to “free download” and so on.

Today the new album of the Solid Rock Blues Band, a solo project by Rudy, was released. The album is available trough many on line streaming services and as a download on many websites.

The album includes original songs and some covers. Most of the songs are blues or country inspired. Covers included songs by Larry Norman, Rex Griffin, Bobby Braddock & Curly Putman and Bob Dylan. Also included is the well known song “House of the Rising Sun”, a traditional song made famous by The Animals (and many others).

I “grew up in church” (Reformed Church) and love these old hymn’s. I’m still a believer. Though some of my opinions have changed over the years. I’ve left the church of my youth and am visiting another church (Baptist) these days after wandering trough some different directions.

In Baptist chruches they play and sing more modern songs these days, you know “worship”-stuff. Anyway – I think these old hymns still are great. Glad we still sting them now and than. But you won’t hear my version in church I’m afraid!

I’ve ”reworked” this one into a more up-tempo song with drums, guitar and bass. It’s available at Audiomack and SoundCloud, for free. It’s almost Christmas right so it’s good to hand out a gift!

One of my all-time favorite songs by Bob Dylan that I’ve played many, many times. On stage, but in the studio also. I’ve recored a few versions of it in the past, but never felt really happy about them.

This next sunday I’ll be playing with a few other (young) musicians and this is one of the songs on the setlist. Even though I know it from the top of my head I played it (rehearsing) and using my Digitech Trio to accompany myself I thought, .. “well, why not record it once more and see how it turns out this time?”

So I did and here it is. Hope you like it.

Copyright Disclaimer
Under Section 107 of the Copyright Act 1976, allowance is made for ‘fair use’ for purposes such as criticism, comment, news reporting, teaching, scholarship, and research. Fair use is a use permitted by copyright statute that might otherwise be infringing. Non-profit, educational or personal use tips the balance in favor of fair use.