Did you ever want to record authentic sounding surfguitar and never found a good plugin to achieve that ‘surf sound’ with your guitar? Cranked up the reverb..? Searched for plugins creating the sound? Well,.. there’s no need to do this. In fact, lot’s of reverb won’t get you there in the first place. And there’s probably not a single plugin on the market that can recreate that sound. You’ll need to have a “chain” of three VST’s to create this sound. Here’s how to do this.

But, before I tell how you can create the “surf” sound (more or less) in your Home Studio (DAW) using a few free VST plugins, some about the music and why we, in the Netherlands, can relate to this type of music so well despite the fact it’s Californian.. It’s a sound so familiar to us Dutch people! Not because of the Shadows (although they were very popular in the Netherlands also) but because of the “Indo-rockers”!

Lot’s of reverb here but on the surfguitar you hear a “drip”.. or “slapback”. That’s what makes the surfguitar sound so unique. Oh, and for those that watched the full video: the man sounds like a genuine hardrock guitarist at some parts! Amazing considering the fact it was in the early sixties!

Now what, you might ask, is Indo-rock? From Wikipedia:

Indorock is a musical genre that originated in the 1950s in the Netherlands. It is a fusion of Indonesian and Western music, with roots in Kroncong (traditional Portuguese-Indonesian fusion music). The genre was invented by Indo repatriates in the Netherlands after Indonesian independence on August 17, 1945, and became popular especially in Germany. Indorock is one of the earliest forms of “Eurorock”. Its influence on Dutch popular music was immense.

So Indo-rock was around even before the surfguitar sound! Some even think that the “surfrock” sound was influenced by indo-rock because many of the Dutch Indonesians also had (have) relatives in Hawaii and the USA. But I’m afraid we’ll never be able to prove that.

And here’s another one. The Tielman Brothers, the most famous Indo-rockers of the Netherlands. A rather wild bunch! Ever seen a drummer play guitar with his drumsticks? Or a guitar player using his feet on the guitar? Check the below video!

I could go on and on about Indo-rock, the roots of it and so on. I won’t. As Wikipedia noted, it’s influence was huge on Dutch popmusic and the people from Indonesia had a big influence on our culture also (and still have today).

As you can imagine, these guys created Dutch Rock & Roll ..!

Okay so here’s how to do it. As you might have guessed by now, I’m not trying to get a very pure ‘surf’ sound, I more likely got close to the Indo-rock sound (I hope). But if you play with the settings of the free VST’s below, you’ll get the surfguitar sound for sure.

To create the ‘slapback’ or ‘drip’ sound you will need to understand that back in the days they didn’t have much to work with. Guitar amps were pretty simple. They didn’t have nice spring reverb or digital reverb. If you wanted effects, you’d need to put them in front of the chain. So using a reverb on your guitar amp or adding it on a track does not work well!

You will need the following VST-/effects chain before the amp or amp VST.

Of course you can use other VST’s, as long as it’s a delay, reverb and Tremelo. Don’t “copy” the settings and expect miracles. Every guitar is different, every setup is. But it’s the chain I’ve got here and that’s what you’ll want to ‘copy’.

The delay has to be set to “analog”, very short, not sync’d and add some low cut and high cut (to your liking).You don’t need much. It will create the needed short slapback. Play around with it to get it as you like it.

Next up: the reverb.

I like a huge reverb, set to about 25% to the mix. This is, of course, a matter of taste. For a genuine surfguitar sound you might need to turn it up even more. 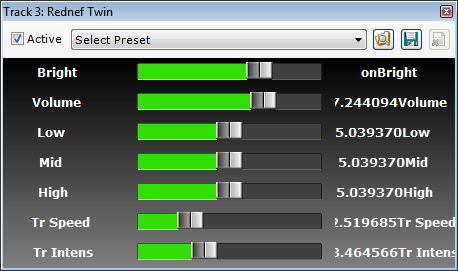 I use the “Rednef Twin” VST plugin. It’s a Fender Twin 1969 (Guitar amplifier). So close to the era we’re looking for. Apart from that, it has a Tremelo (speed, intens) available.

It’s a free VST and if memory served me well I’ve downloaded it from SimulAnalog’s website. It’s part of the “guitar suite” and one of the VST’s I probably used the most.

It doesn’t look like the most (commercial) VST’s but it works very well. There’s a good reason for it’s “looks”. From the website:

“This suite is not a commercial product. It is born inside an academic research project about the modelling of electric devices, and then applied to the musical instrument field as an evolution of the techniques currently available in some commercial units. Its most important feature is the extremely high precision of the simulation, which is about indistinguishable from the original sound“.

Here’s a demo of how this setup sounds. The rhythm-guitar has a simple mono reverb. I choose mono, because that’s what they used back than (I assume).