Herman (Drums) & Rudy (Guitar, vocals) got together last summer and recorded three cover songs: Shotgun Angel by Daniel Amos, Dancing Barefoot by Patti Smith and 40 by U2. A fun unrehearsed session. The songs are now available at Drooble and SoundCloud.

The last song that was mixed and finished was Shotgun Angel by Daniel Amos, a christian alternative rock band formed in 1974 and still active.The song isn’t a real rock song though. We think “country” would fit the song best so it has been labeled like that on Drooble.

We both picked one favorite song for the session. Herman choose Shotgun Angel, Rudy choose Dancing Barefoot. Since there was some time left we more or less improvised U2’s “40”.

After the initial sessions the bass guitar and additional guitars were recorded. But basically it was a jam session  and lo-fi recording. We’ve planned to get together again next year at Herman’s house where he will be playing his own acoustic drums.

Soon after posting the song on Drooble it went into the charts! Hope you like this recording. And we hope it will stay in the charts for some time of course.

Over the past years several cover songs were recorded, including a few at an empty store (“Abandoned Store Sessions”). 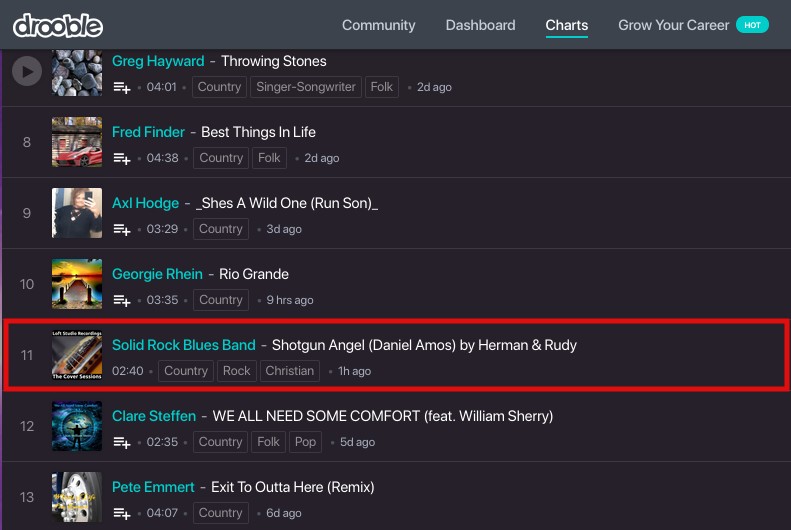 The cover of Shotgun Angel landed on #11 on the first day it was uploaded and got up to #7 on the next day. We’re very happy you all took the time to listen and hope you enjoyed our lo-fi cover of this song a lot. Of course we can’t compete with the original. You can find that on Youtube.