Yesterday someone I got to know trough Facebook, Herman, and I came together in my home studio to record the basic tracks for a set of cover songs we both like. Including this one, by Patti Smith’s “Dancing Barefoot”. Audio you hear is taken from the smartphone we used to record the video.

We also recorded Daniel Amos Band’s “Shotgun Angel” and U2’s “40”. All in one session! Drums, one guitar and vocal. Now it’s up to me to re-record the vocals and also add bass.

This song will have female vocals, to be recorded later. Making music with someone you’ve only known online for a few years can be a little tricky — but we had a lot of fun today and worked out very well!

That’s the basic idea of the ‘Solid Rock Blues Band’ concept. While it’s a one-man-band, I love to work with others to play and record music. We might be doing a few additional recordings in the future! 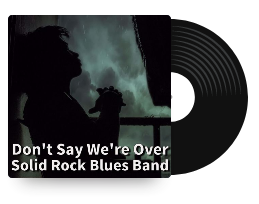 It’s here! Don’t Say We’re Over has been officially released this week and is now available on Spotify and other online streaming services! Of course it is also still available on BandCamp since that’s where we have made our complete (back) catalogue available.

The official album release was done trough Amuse. We are considering re-releasing some older albums trough Amuse also, making them available (again) to the public trough services like Spotify and Amazon Music. Our experiences with DistroKid were fine so far but didn’t turn out to be successful in terms of sales. So we’re giving Amuse a try for distribution! So far, so good! Amuse has delivered the album to all platforms we’ve opted for and all went perfectly well.

Listen for free at Spotify
https://open.spotify.com/album/0tLnwkIbovvo0fAXgWWgQy