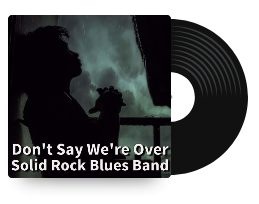 Yes! Back at Soundclick and charting already! The Solid Rock Blues Band, previously known as Barking Aunts and YAOMB (Yet Another One Man Band) started on IUMA, mp3.com and.. SoundClick.

Well over 25,000 streams on SoundClick in only a few years convinced me (Rudy) there were at least some people who liked my music and I continued to build a following and friendships on SoundClick, some of the people I’ve gotten to know over there are still good friends! However, SoundClick was getting behind, had lot’s of technical issues, the forum was closed down and the place was “taken over” by people (artists) creating and selling “beats”. Not the place anymore for a musician like me.

However, SoundClick got their act together some time ago and we finally also managed to login to the site again (after four years..!) and uploaded the latest album “Solar Powered Love” yesterday. It was, to our surprise, an “instant hit” hitting #59 at the Blues Charts within 24 hours!

Soon after it landed on #1 in the BluesRock Charts and #2 in the general Blues Charts. Amazing! We are really happy and grateful this happened!

You can stream/listen to the tracks at SoundClick here:
https://www.soundclick.com/artist/default.cfm?bandID=1398985&content=songs

Thank you for your continued support!