SoundCloud is an amazing platform for sharing and listening to music – especially a perfect place for musicians on a tight budget and independent musicians looking for a place to host their tracks or share them with the world. Many bands, solo-artists, talkradio, local radiostations and so on share their audio on SoundCloud. This has come to grinding halt.

UPDATE – SOUNDCLOUD HAS GOTTEN A LOT OF FEEDBACK ON THIS DECISION AND WILL NOT IMPLEMENT IT.

What happened? SoundCloud notified it’s users they would need to pay for the services SoundCloud is offering as soon as they post more than 15 tracks or 3 hours of audio. Of course there is a simple way around this: put your albums in one huge mp3 per album.. so you can post 15 albums. But that’s not very useful. Especially for all these artist websites, studios, bands and so on that embedded their songs in their websites. Or, even worse, other websites that embedded their tracks, .. you would need to remove the tracks and upload new ones. Or, .. do nothing. Since, if you don’t upload new tracks, the old ones will stay at their service. The effect of this will be your account will be ‘frozen’. If you want to stay with the free service and remove tracks to post new ones there will be many ‘dead links’ to your songs.

For podcasts or radiostations, 3 hours and 15 files will probably enough to have their 15 most recent shows online. But still, the archive of shows will need to go if they have any.

So, is there no other way around it? Yes, of course there is.. as I’ve mentioned: if you’re willing to pay. If you pay some money you get unlimited upload. You can keep using the service as you were used to. Currently they offer a discounted version, for around €75 for the first year. That’s still a lot of money for many people. So people will abandon ship or remove songs to post new ones.

I mean, really, do they want this to happen at SoundCloud? 404-errors all over? Dead links? I think it hasn’t occurred to them this will not only kill their website traffic but also their Google SEO-ranking… 🙁

THE END OF SOUNDCLOUD AS WE KNOW IT

This would be the end of SoundCloud as we know it and as we loved it. A 15-song limit is way to small. Especially if you have been around long, you might have build up a nice catalogue of songs as a band or solo-artist. And as soon as you want to upload you have the choice: pay or loose a (large) part of your library, effectively killing all embeds and ‘deeplinks’ to your music. This is, imho, blackmailing people to pay. It’s no problem for us to put the money on the table, it is, however, against our will. We’re being forced to pay .. and we don’t like that at all..!

The tracks by Solid Rock Blues Band and others recorded at the LoftStudio (Zolderstudio) can be found here:
https://soundcloud.com/barkingaunts 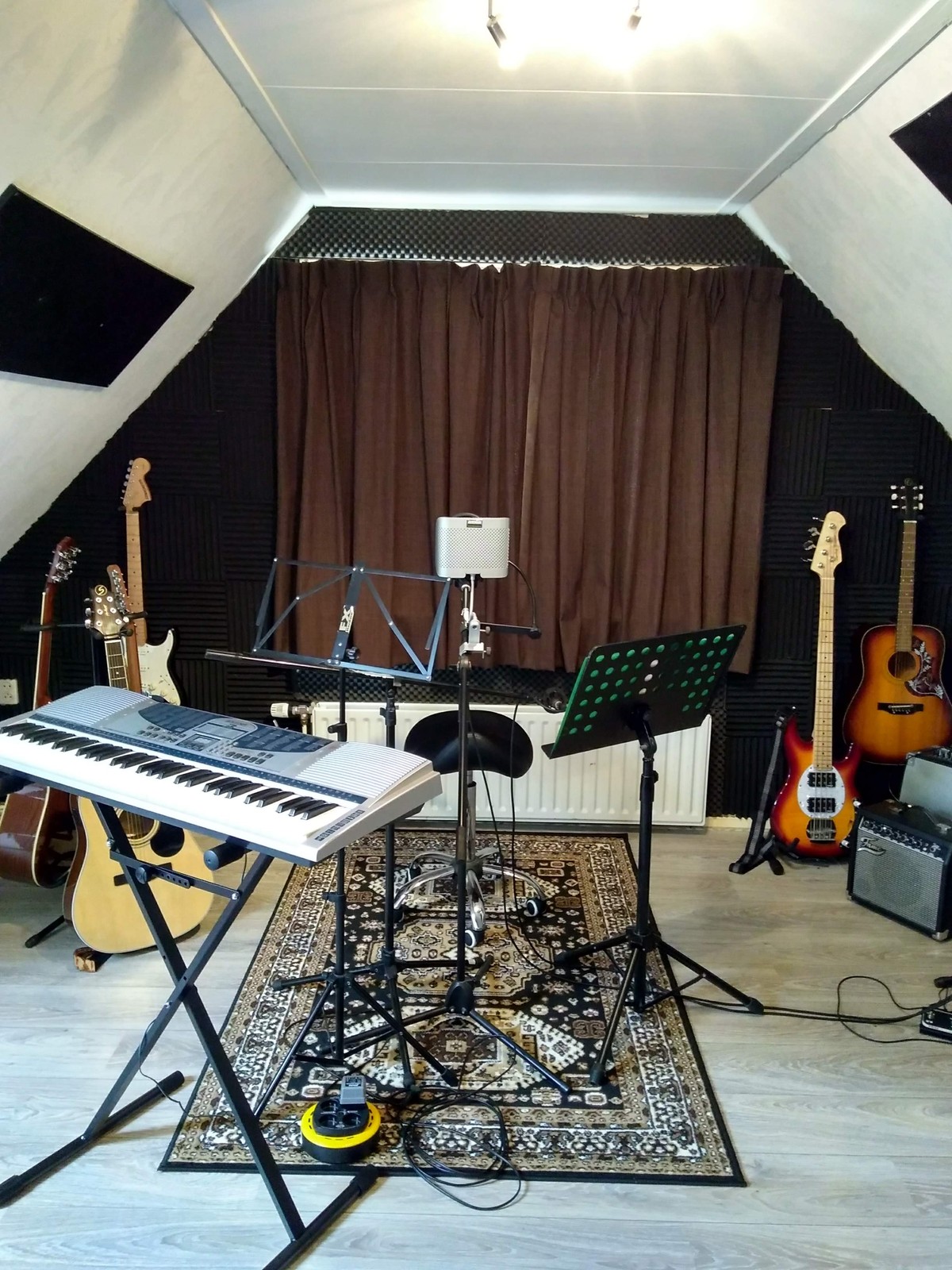 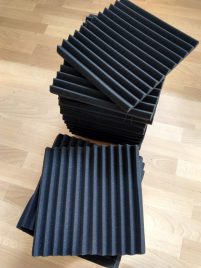 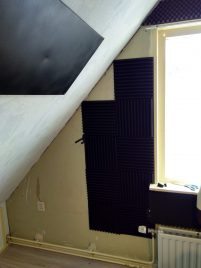 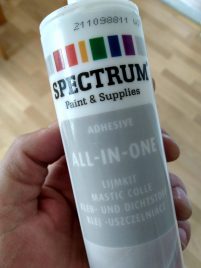 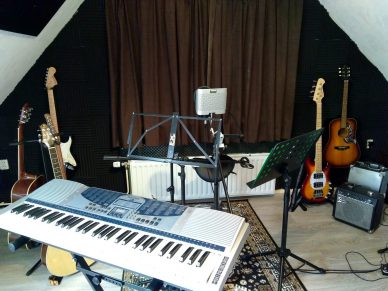 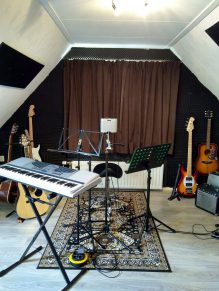 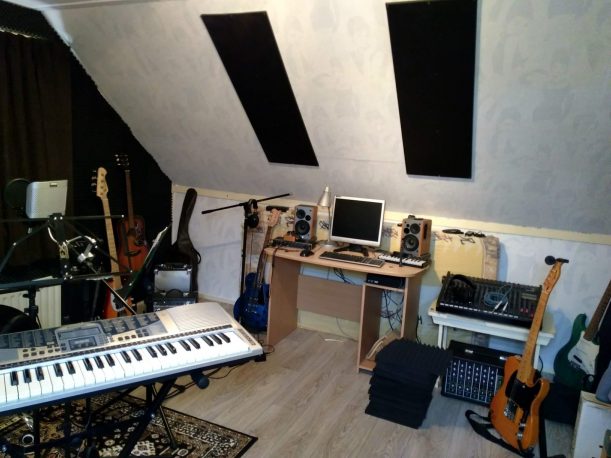 What better way to celebrate using a new studio than recording a classic, acoustic, folk song? The ZolderStudio (LoftStudio) has moved! So I did some test recordings and one of them is Dylan’s “Knocking on Heaven’s Door”. And I did not only record the song, I made a video of the recording session.

It’s just a simple “one-take recording” using my MXL770 for vocals, a t.Bone EM700 for the guitar and I’ve used the Behringer UMC404HD as an interface. The DAW I’ve used was Ardour (Linux).

MOVING TO A NEW STUDIO
I’ve also made a short video about the move to the new studio. A full studio tour will be made as soon as the studio is setup completely. I’m still waiting for acoustic foam, ordered a floor carpet and there are now new monitor speakers too. So subscribe to the channel to receive updates!

Today the new album of the Solid Rock Blues Band, a solo project by Rudy, was released. The album is available trough many on line streaming services and as a download on many websites.

The album includes original songs and some covers. Most of the songs are blues or country inspired. Covers included songs by Larry Norman, Rex Griffin, Bobby Braddock & Curly Putman and Bob Dylan. Also included is the well known song “House of the Rising Sun”, a traditional song made famous by The Animals (and many others).

Today I’ve recorded “Sing Me A Song”, a free song available on SoundCloud (and Audiomack also soon) in my studio. It’s less than two minutes(!) and the full lyrics are included at soundcloud. I’ve posted a short demo of it before. Including a video.

The song was recorded using Ardour Studio (here’s a video about the small and low budget studio I operate) and for the acoustic guitar I’ve used my Washburn guitar. For recording this great acoustic guitar I’ve used a (very) cheap Chinese pickup I’ve bought some time ago (video/demo). I also added a condenser mic in front of it, so it’s got two sound sources in the recording giving it more depth and ‘space’.

For drums and bass I’ve used my Digitech Trio pedal and finaclly the electric guitar is my Fender “Starcaster” Stratocaster on rhythm and lead guitar. For this guitar I used the JoYo “American” pedal. A superb pedal that works very nice with Fender guitars but also with my Gretsch of course.

Finally I recorded the vocals using my BM-800 mic. One of the best condenser mic’s you can get for the money, paid less than $20 dollar for it!

Today we’ve released our first, official, single at BandCamp, Audiomack and SoundCloud. The single, an original song written bij Rudy & James, is available for download for only US$ 0.70. You can stream it for free on all sites mentioned of course.

The song is a more-or-less acoustic folk-rock song, recorded at the ZolderStudio. The song was written and composed originally by Rudy, and after the first rough demo was recorded it was send to his friend James (aka “Le Jaz”). James wrote the bridge and came up wih some advice and suggestions for the chord progression. Yesterday the final version was recorded and mixed. Today we did the ‘mastering’ and here it is!

At the moment we’re still working on songs, new original recordings and covers. We expect to have enough good tracks for a debut album for the spring of 2018. We hope to be able to publish a 12 track album but it will be at least containing eight songs, including some cover songs.